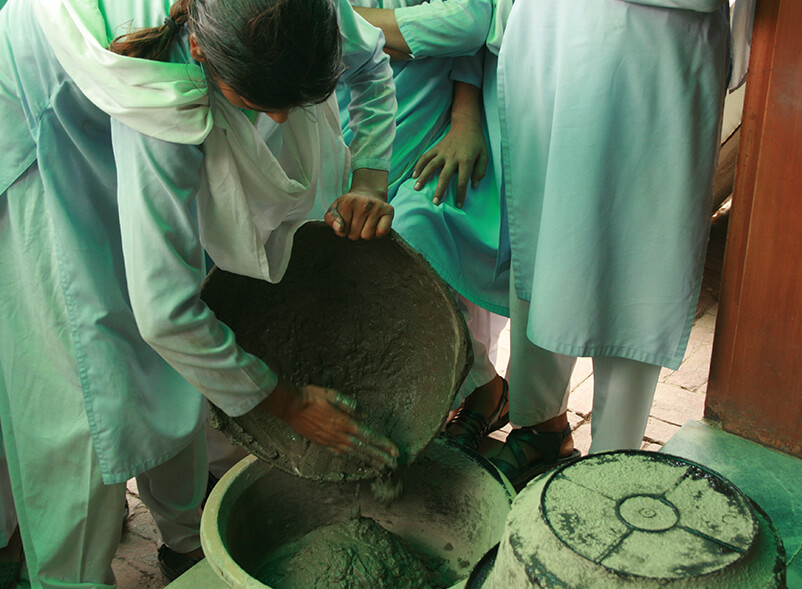 Education is Action-Led at Khoj School

Khoj promotes education that is gender just, relevant and integrative. But the relevance and integration is not confined just to the conceptual understanding of the content and relating it to the daily lives of the learners.

The hallmark of the education here is to take the conceptual understanding to another level in their practical lives. Learning is applied in the personal and local context. While learning the plant biology, the children verify all new knowledge in the garden of nature. The garden of nature is not limited to the school garden but extends to their home gardens they have started after learning new ideas in science and mathematics.

Everyone does not have patches of land to grow ornamental and food plants. They have to make a resort to planting in pots. Khoj School for Community Education also teaches them how to makes low-cost pots of various sizes and shapes. 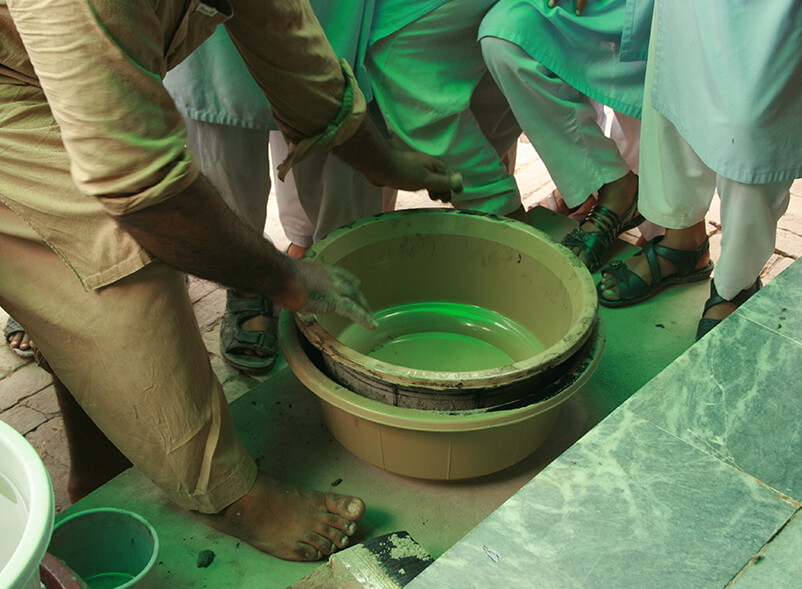 Children were excited to see how pot can be made using various household items using small quantities of leftover sand and cement at home. The new skill frees them from the dependence on the elders who need to look for free time and enough money to buy expensive pots from the market. Instead, they can make pots for them as well and can grow almost no cost food for the family, using organic inputs.

The new approach is helping them get conceptual understanding and scientific thinking, test their new knowledge by growing plants, make low-cost pots to grow plants on smaller spaces and grow healthy organic food using inputs available at home at no additional costs. 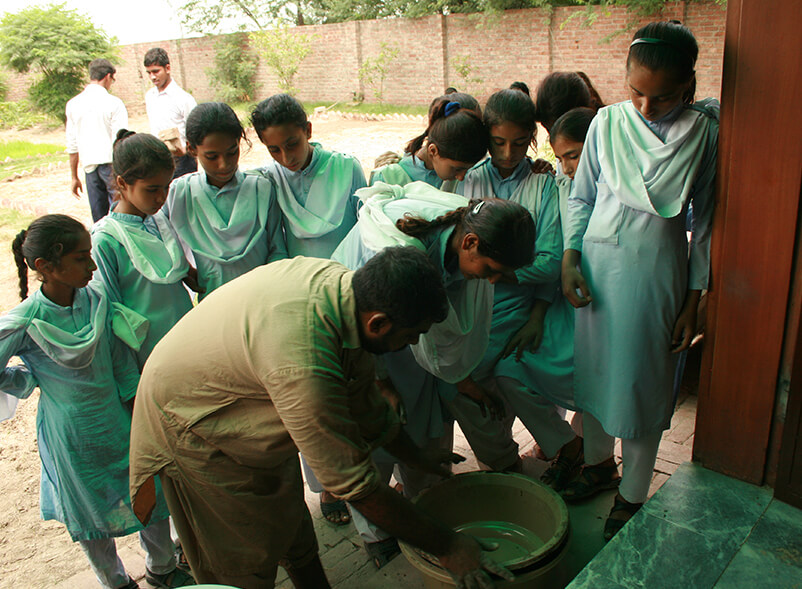 Children at Khoj School have started a chain of action which has the potential of growing into a movement for growing safe food. 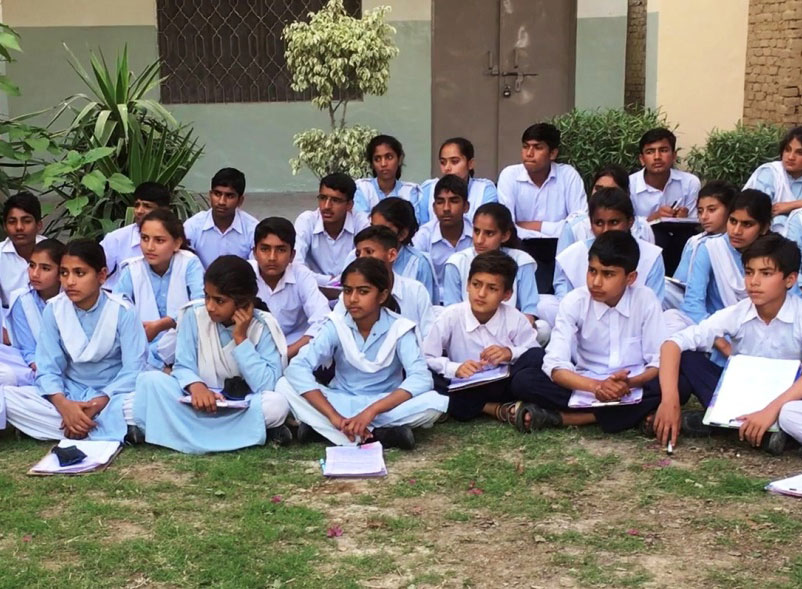 Distance has never been a deterrent for the Founder of Khoj to not interact with the students. It was March 8th International Women’s Day and travel to the field was not a possibility. Luckily, the school is set up for virtual classes which make it possible for distance learning. This opportunity allowed a discussion on what exactly it meant to celebrate this day. The Founder gave a historical background of the occasion. But this was not the only thing that happened; a lively discussion ensued, both girls and boys help their parents in farming so the concept of equality was somewhat unclear. In order that this was understood better students of higher grades were asked to prepare a short talk on role reversal.

A question arose what if women were paid for the amount of work they put towards the housework made the boys uneasy. This is not what they would be happy paying for the work which to them was as normal activity and never crossed their minds, one of the boys even suggested that if that were to be the case he would much rather do all the work himself. His comment led to the need for boys’ equal contribution to the domestic work. 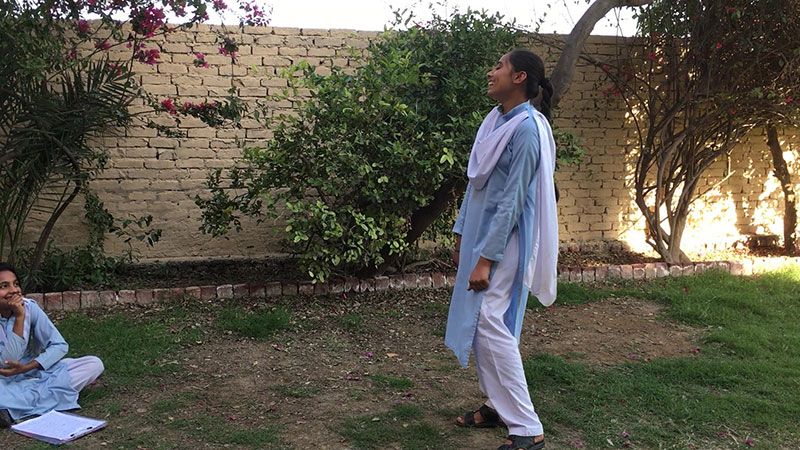 When the stage was set, the Founder gave a short history of Millennium Development Goals and Pakistan’s performance in achieving the goal of women’s empowerment and gender equity. It was also shared that to work towards the unfinished agenda, Sustainable Development Goals have been launched. Goal 5 of SDGs was also discussed at length.

Next morning a visit was possible. The students were excited because they had all prepared a short essay on if I were a girl/boy. When the girls wished they were boys was mostly because of mobility and freedom to do what they liked. Going to festivals and melas, sports and visiting friends at any time of the day and also for further studies to another town/city was also expressed a reason for wanting to be a boy. Riding motorbikes was another possibility if they were not girls. Interestingly a few hands were raised when the girls were asked how many would prefer being boys that showed the suppression they lived under. 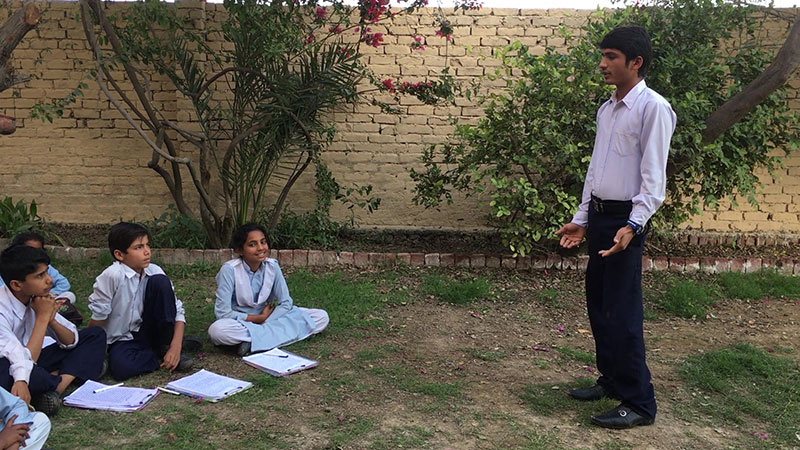 On the other hand, the boys felt that if there were role reversal they would look after their parents’ needs and cook for them. Extend help to their mothers and little else. They clearly had no idea what being a girl/woman meant. The restrictions imposed on girls after dark, travelling alone to other cities while the boys could do as they wished. One student, however, wrote a very sensitive piece on how they as boys should realize how girls feel the constraints and how they as boys could help.

Khoj School has been trying to break the stereotypes and nurture an alternative culture of care and fair play through an alternative gender-sensitive curriculum.

From Garden to Lab – By Nasira Habib

At Khoj School for Community Education, the science of plants and growing plants starts from a school garden where children interact with a variety of seeds and plants. They observe various behaviours and characteristics of the plants and their parts. While growing plants they encounter various issues and challenges which put them thinking and questioning.

Now the stage is set and children have some background to go deeper to learn and understand the structure of plants, seed structure and germination, plant cells and how photosynthesis, respiration, transportation and reproduction take place.

Learning about how plants cook their own food exposes them to the concept of energy and various forms of energy. 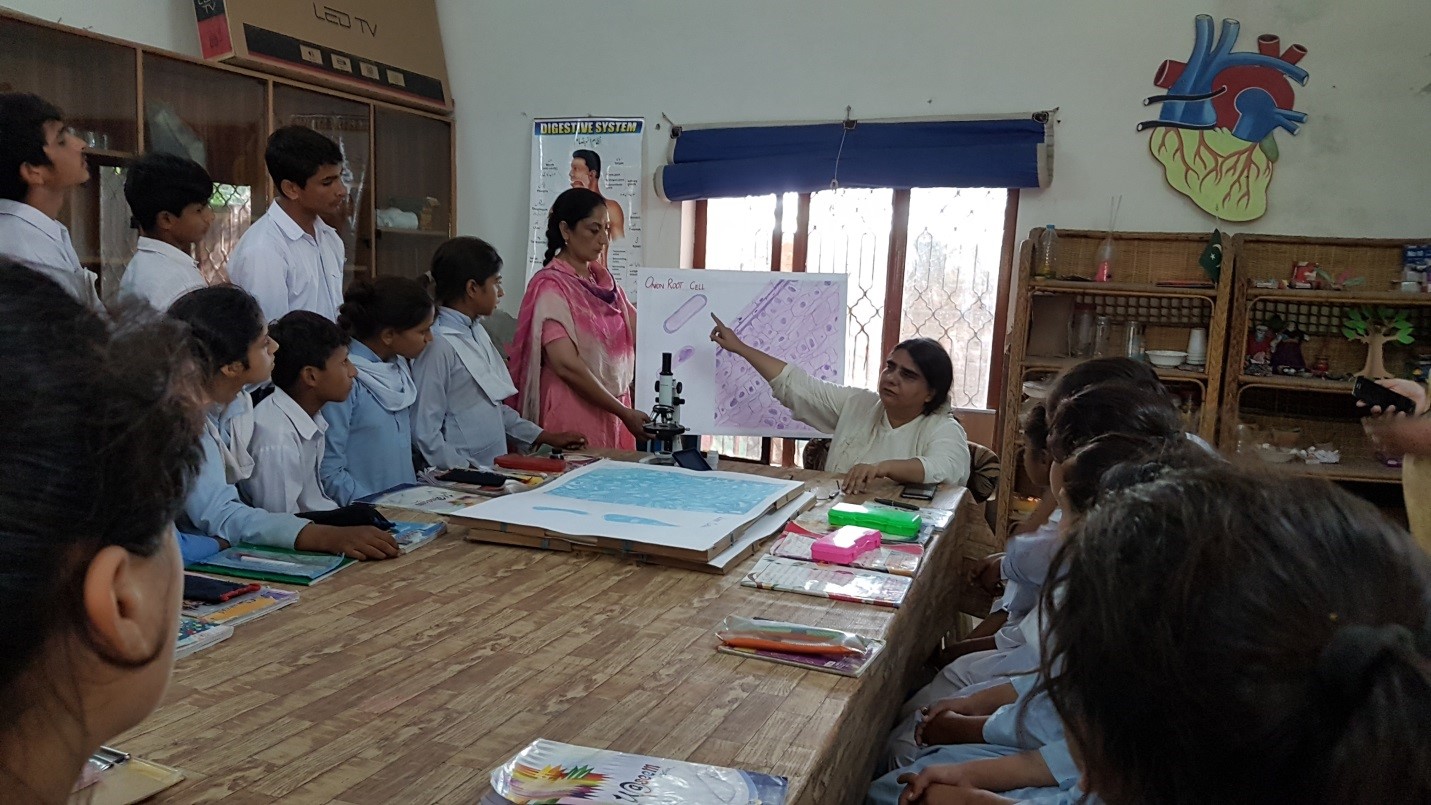 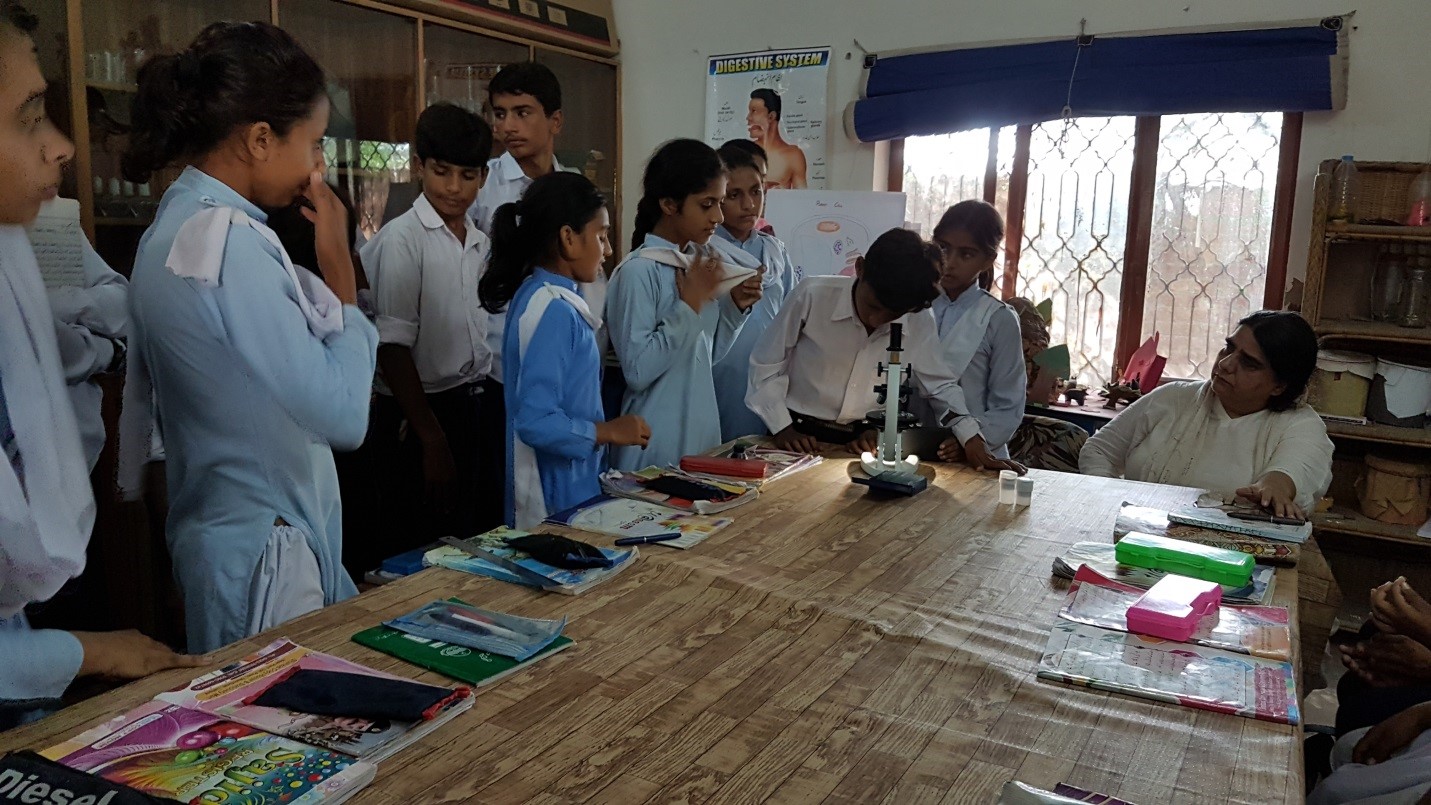 Learning about the science of plants gives them a new perspective and they start looking at gardening and environment differently. 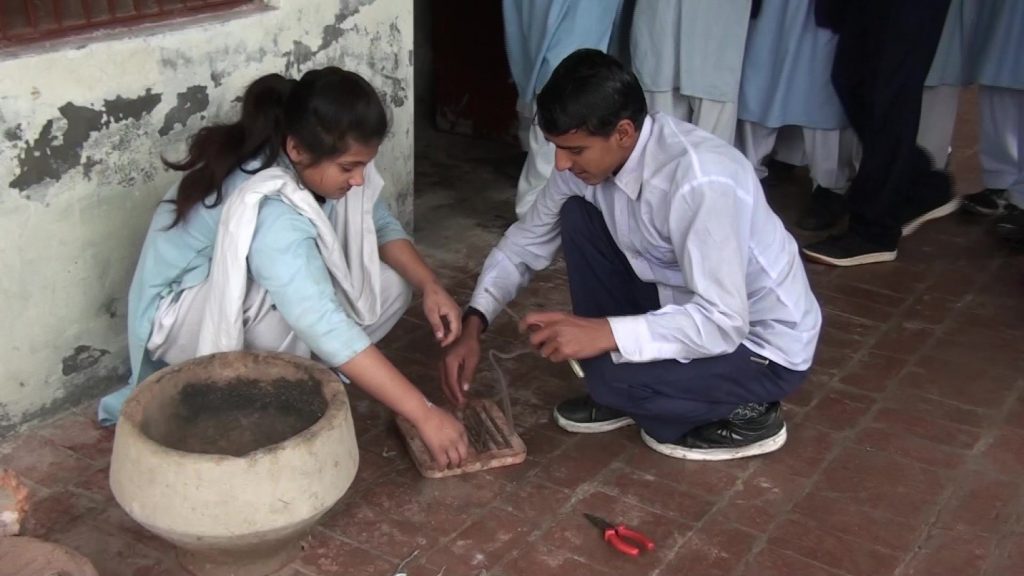 Why I Am Writing This – By Asma Sufi

Why I am writing this is because of an overwhelming respect for Nasira Habib who is the founder and director of Khoj – Society for People’s Education. She started with teaching women of the urban poor to read and write which later included out of school children in the same location. The efforts however, did not end there, a village 75 kilometers away from the city was the next target site to explore. The locale was rough, only mud roads which made travelling a formidable task and crime rate that was unprecedented, although daunting the challenge was taken head on. Eighteen years down the road parents keep bringing their children for enrollment, including dropouts.

I think I am fortunate to see the change (pictures of yore) and now. There have been several occasions for me to visit the village and the school, interact with the children from ECE to older students of grade six and above, the tenacity and resolve to make this innovative approach to teaching is truly amazing. Because of the interesting approach to teaching which is unique. Learning through doing is an exercise the children of the school have mastered.

Living in urban areas we can only think of getting whatever is needed from the market however this is not the case in this remote village of Thathi Bhanguaan, which lacks the luxury of buying anything off the shelf. The villagers very much look after their needs in traditional ways or make arrangements with whatever material is available to them. Thus the school has been a great boon to these community children, they have learnt ways and approaches to innovate and create.

As part of the science project experiments are hands –on activity. It was fascinating, when the students of grade seven and above were asked about different sources of energy and how they relate to this energy, that which is available in nature and that which can be created through the use of indigenous material. They were quick to respond, no girl wanted to be left out of this session.

Witnessing the building of a home heater that could be used for both purposes, such as warming a room or cooking was indeed interesting. Students got ready to conduct the experiment collecting raw material and things that would be used. Everyone was eager to contribute their small effort and rushed around enthusiastically. 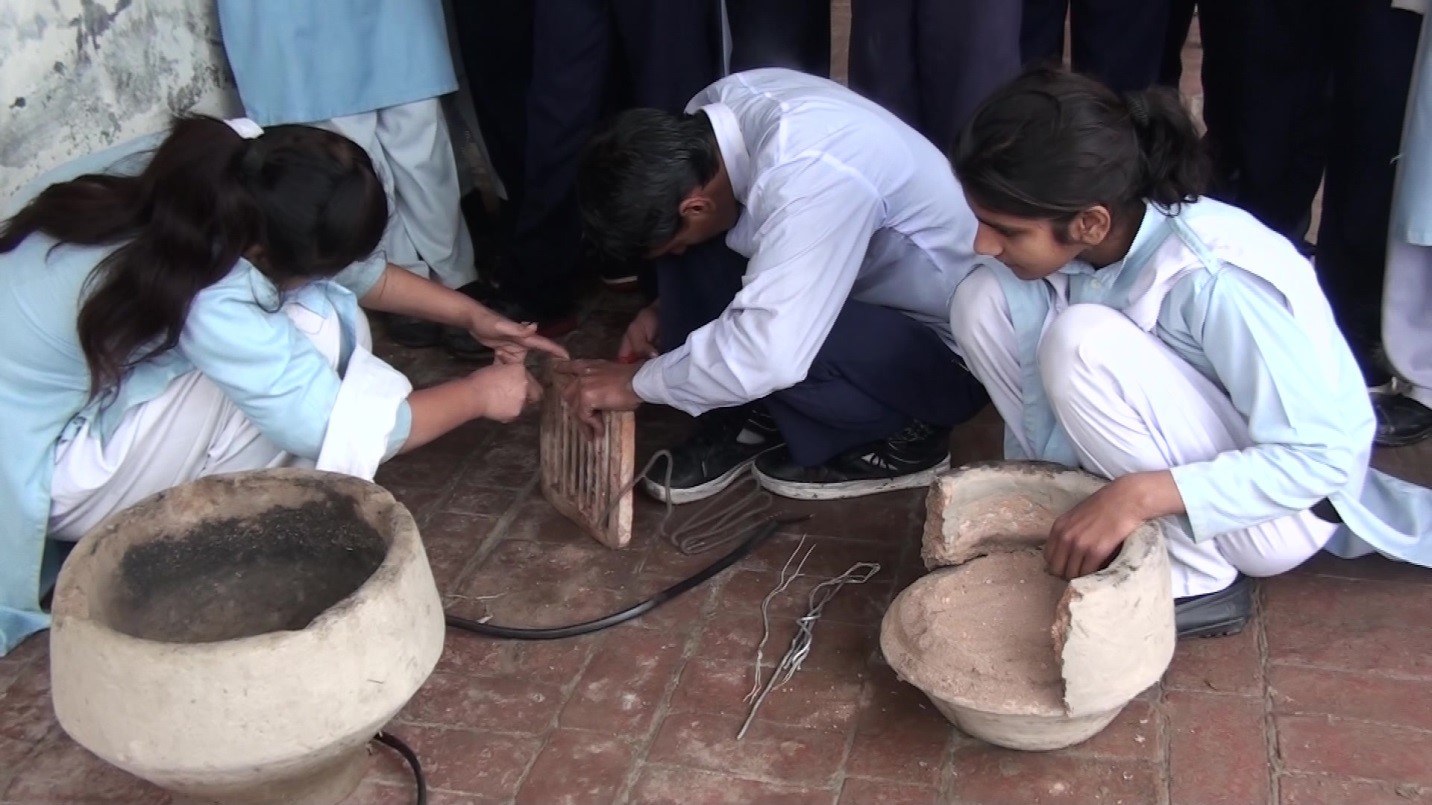 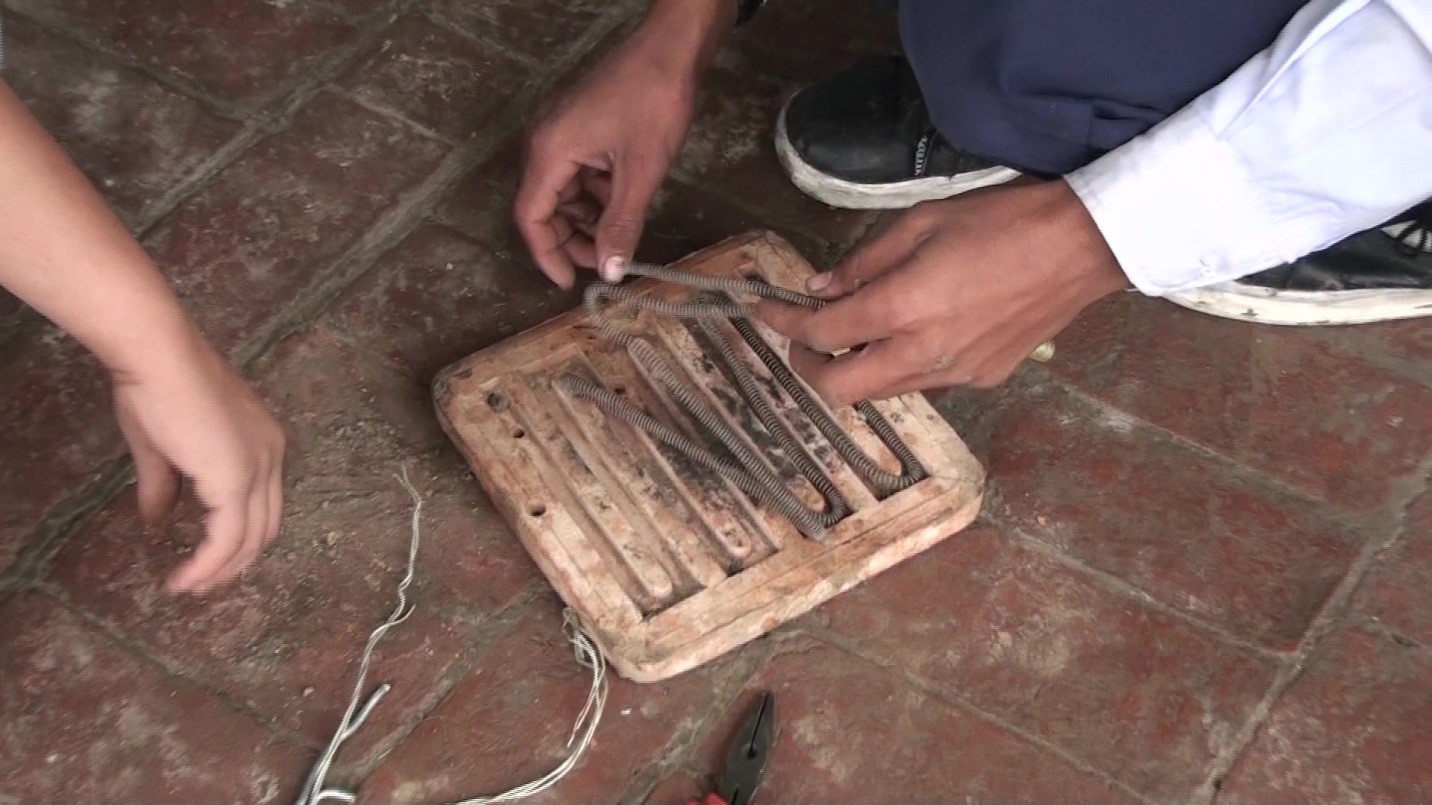 Material that was used was easy to obtain which was an earthen pot, a clay plate with grooves, cables and coils. Samra and Irfan took up the task of putting the different parts together. Rubab brought dry sand in a pot that would be used as an insulator, while others watched. All this was deftly put together by Irfan. Inserting the coil seemed to be a very intricate task and finally screwing it down on the clay plate. Questions were raised and answered about conduction, good and bad conductors, why was insulation required. And the teaching about electricity, circuits and electric current, fuse and static electricity was built on their knowledge they already had.

Khoj – The Society works with women and children through an approach and methodology that focuses on action led, need based, relevant and gender responsive education.